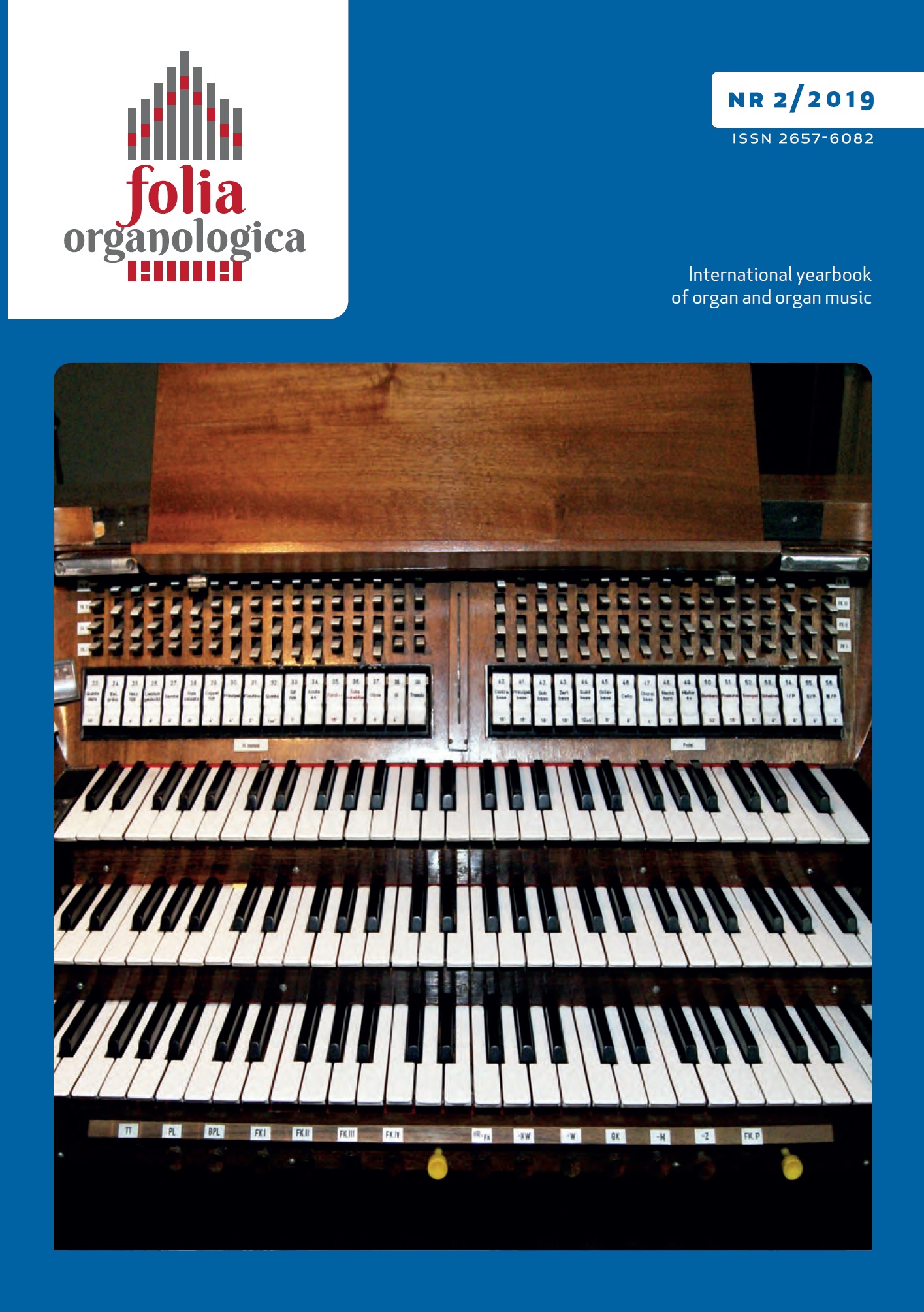 RUDOLF KUŹNIK – ACTIVITY IN THE AREA OF THE DIOCESE OF OPOLE

The documents from Rudolf Kuźnik's private archive have not been published so far and they provide an important part of source materials. He started his activity thirty years after World War II when it was relatively easier than right after the war. His role in the field of rennovation in the area of the Diocese of Opole was, without doubt, significant. It was him who brought many instruments to “life”, which was surely a result of good cooperation between the Commission of Church Music and the parishes. According to sources from the organ builder's archive, his activity in the area of Opole diocese started in 1977.

The paper sheds new light on the history of the construction of two pipe organs at the Trinity Parish Church of Nowa Wieś Książęca, Kepno county (Greater Poland Voivodeship), in the period from 1804 until present-day. The first instrument was built in 1804 by Franciszek Majewski, who was also the founder of the organ-building workshop in the nearby town of Rychtal. The second instrument was built in 1942 by Josef Bach, who was the last owner of the Rychtal organ building business. The paper is based primarily on documents from the Trinity Parish archive, as well as the inspection and the photographic record of the instrument, carried out by the author.

The parish church of the Assumption of the Blessed Virgin Mary in Opava is connected with important chapters of the history of the Silesian organ making. The earliest evidence of the local organ is the report from 1506. In 1620 there stood a large three-manual organ, rebuilt by Stanislav Bartodějský. The following text deals with another large instrument brought there by the Opava organbuilder Jakub Ryšák. The organ was repaired at the beginning of the 18th century by his son Ignác Ryšák, his wife Christina and her second husband Wenzel Thiel.

HISTORY OF THE RIEGER ORGANS IN JESUIT CHURCHES OF KRAKÓW

With the aim of presenting the history of organs built by the Rieger company in Jesuit churches of Kraków, the author investigated several archives. He primarily became acquainted with manuscript sources, collections of organ-making companies and press. Thanks to gathered information, it became possible to present the circumstances of building the organs as well as their later renovations and modernizations. The majority of these fact have not been scrupulously studied in the literature so far. The article broadens the hitherto known state of research on the history of Kraków’s organ building and on the activity of the Rieger company in the territory of Southern Poland.

Georg Joseph “Abbé” Vogler (1749–1814) was born in Würzburg, Germany, and worked as music theorist, componist, organist and spiritual. In his lifetime, he rarely spent a longer time at one place, because he always wanted to go to another foreign country. Nevertheless there were longer stations in his life, such as Mannheim (1771–1778), Stockholm (1786–1799) and Darmstadt (1807–1814). His stay in Prague in the years of 1801 and 1802 belonged to a series of short stays in Copenhagen, Berlin, Silesia, Vienna and Munich, each of them lasting maximum two years. In Prague he teached as “professor of musical art”, played improvisation concerts on organs and his so-called “Orchestrion” and rebuilt the organ of the church St. Nicolaus after his “simplification system”.

THE GREAT SVATÁ HORA ORGAN – THE IDEAL INSTRUMENT FOR INTERPRETING THE MUSIC OF J.S. BACH IN THE CZECH REPUBLIC

Vladimír Šlajch’s organ at Svatá Hora in Příbram draws to a close an important stage of his life. The instrument embodies a synthesis of original solutions and tried-and-true traditions. Vladimír Šlajch built it as a sort of tribute to the organ builders who once worked in Bohemia. From the layout of the instrument, we clearly see the wealth of sonic possibilities at our disposal. The many colours of the registers can be combined into an almost inexhaustible quantity of shadings. The article presents how and why the Svatá Hora organ is indispensable for the successful interpretation of Bach’s music.

ORGAN IN THE PIECE MEDITATIONS OF TOMASZ KULIKOWSKI

This article contains the results of the analysis of the piece Meditations by Tomasz Kulikowski. He is a contemporary Polish composer, organist and teacher. The first part of the article is devoted to his life and work. The next one presents the circumstances of the creating the composition, with particular regard to the title given. Meditations were written in 2003. It is a chamber piece for the organ and cello. The third part contains an analysis of the composition structure. The significance of the organ for various elements of the work turned out to be extremely interesting. Their functions are described in the fourth part. 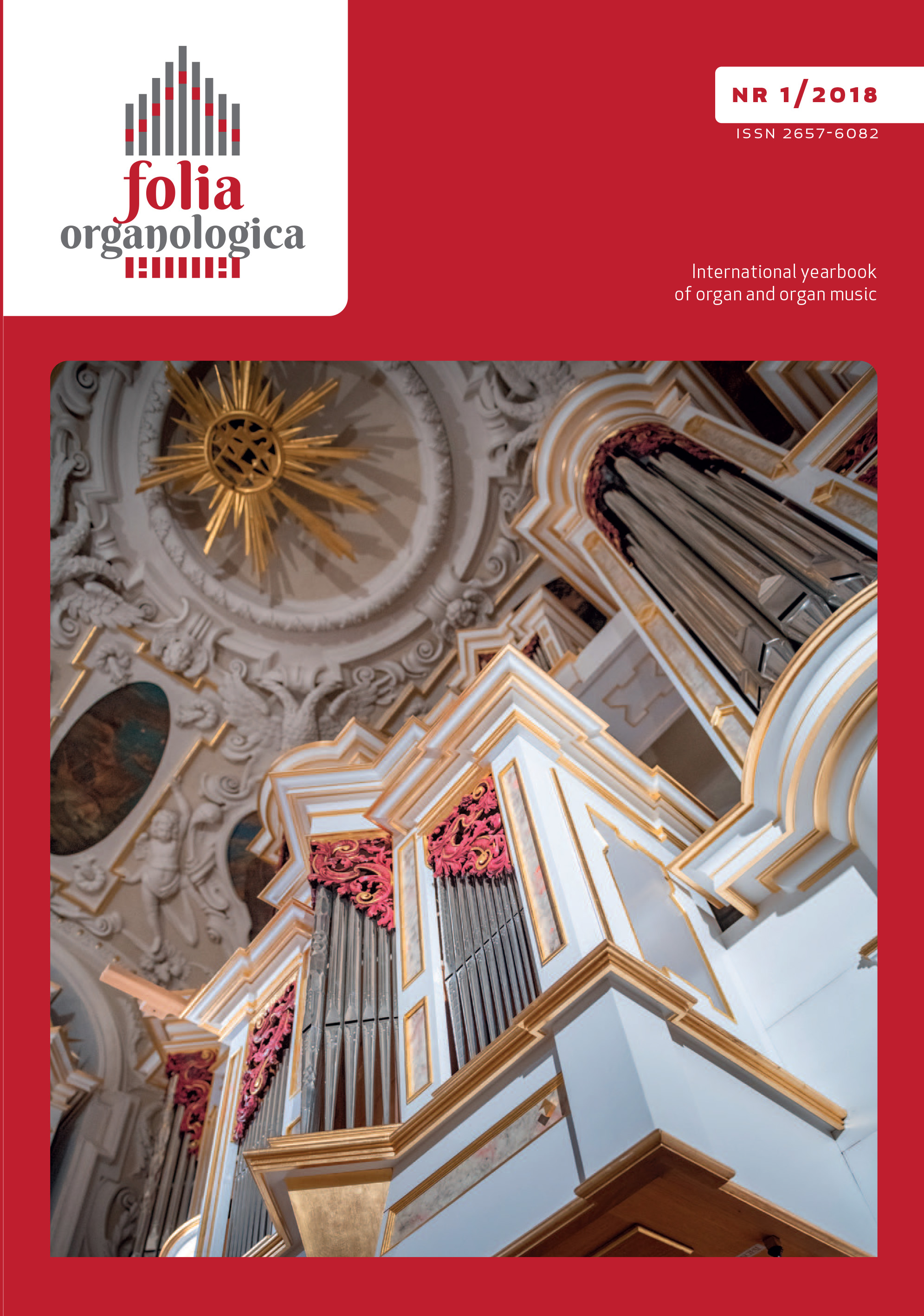 Folia Organologica is a reviewed, international annual journal, concerned with pipe organs and organ music. It is a continuation of a non-periodical editorial series Silesian organs, initiated in 2007 by the Department of Musicology of the University of Opole and the Diocesan Institute of Church Music in Opole, which resulted in five volumes of studies on that subject.